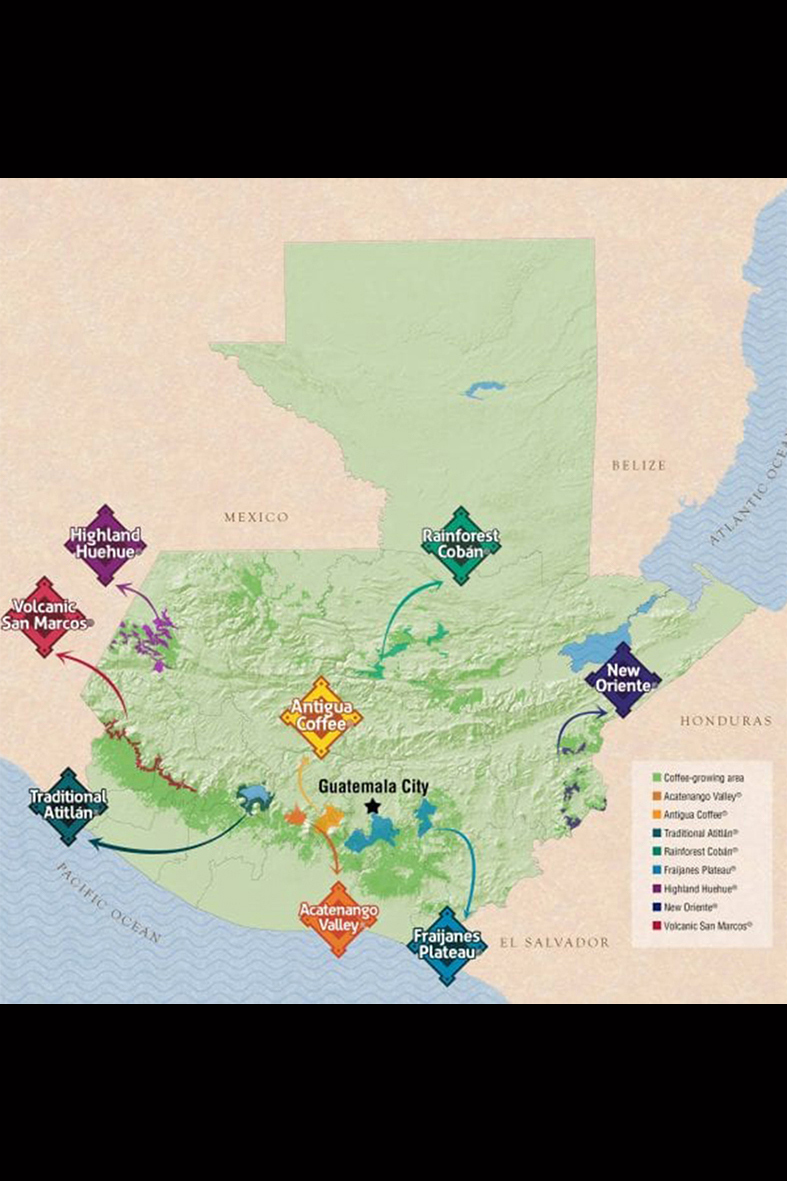 Guatemala is a country known for its production of high-quality coffee. Guatemalan coffee is regarded as one of the best types of coffee in the world because it grows in mountainous areas where it develops a more intense, tart flavor, depending of course on the climatic conditions under which it was grown.
Guatemalan coffee production is slowly recovering from the rust outbreak of 2012, and planted area is revised up 9 percent as new rust tolerant varieties are planted. Production for May 2017 closed at 3.3 million bags, down six percent from the previous estimate. May 2018 coffee production is estimated at 3.3 million bags, down two percent from the previous forecast and is forecast to maintain stable in May 2019. The United States, Japan, and Canada continue to be the top export markets.
AREAS OF COFFEE PRODUCTION & PROFILE IN GUATEMALA

Growing Regions:
ANTIGUA has farms mostly between 1300–1600 meters. The volcanic soil helps lock in moisture, as the region is sunnier and the coffees are sweet, smooth, and good for blending or as mild, lower-acid single-origin offerings.

ATITLAN has a very rich soil composition thanks to the volcanoes around Lake Atitlan. The windy and humid climate contribute to the nutty, dark chocolate characteristics that are balanced by a lemony citrus aftertaste and some florals.

HUEHUETENANGO is the most famous region, and has the highest altitudes in the country, as high as 2,000 meters. Coffee from this region tend to be the most fruit-forward and can price to be the most complete coffee that Guatemala has to offer.

COBAN has more gentle coffees in flavor, with an otherwise full body, and rounded profile. Distinctive coffee for Its soft acidity and light floral aromas. Coffees from Coban and Huehuetenango tend to be from micro & smaller farms.

NUEVO ORIENTE is a small region in the south-east part of the country produces a full-bodied coffee with loads of fruitful-floral balance. The climate in this region is cloudy and rainy than the rest of the country.